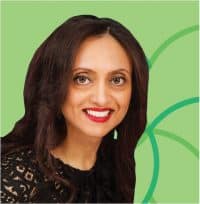 Sandeep has worked at the NHS Northwest Boroughs Healthcare Trust since 2006 as a Consultant Child and Adolescent Psychiatrist leading young people’s eating disorder services and as Director of Clinical Networks before taking on the role as Medical Director on 1 April 2018.

She developed the award-winning medical skin camouflage service for promoting recovery in self-harm in partnership with Changing Faces charity and is now collaborating with the University of Manchester on a Research for Patient Benefit Grant to study this intervention further.

Her published research includes perinatal neuroimaging and eating disorders. She has been clinical advisor to The National Children’s Museum ‘Eureka’ and currently sits on the Royal College of Psychiatrists’ Eating Disorder and Child and Adolescent Faculty executive committees.

She is a media spokesperson and advisor for eating disorder charity BEAT and the Royal College of Psychiatrists and is a regular contributor to a range of newspapers and magazines. She mentors and coaches doctors and supports the diversity in leadership agenda nationally.

She is the lead for i-THRIVE North in partnership with Thrive (Anna Freud and Tavistock Portman) to develop the first training academy outside London. She is a contributing author to the Royal College of Psychiatrists’ book ‘The Female Mind’, was awarded a fellowship to the Royal College of Psychiatrists in 2014, and was appointed Trustee to the board for Cheshire Community Foundation in 2017, supporting the work of the third sector across health and social care.

Sandeep has also been appointed as Visiting Professor for Mental Health at The University of Chester in 2018, which further strengthens our academic links and will increase teaching and research opportunities for the Trust.

Hurry up, only a few tickets left!